One usually associates states such as California with progressive attitudes as well as actions on the topic of renewable energy. However, New York State is coming front and center with an attitude and intension of becoming a top world example with the uses of solar, wind and water as renewable and sustainable energy. 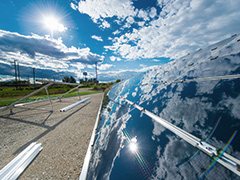 The New York Green Energy plan is currently the focus of a number of scientists and universities for study and potential implementation throughout the country. The plan will include new on and offshore facilities for rooftop, wind turbines and stand alone solar arrays as well as ocean wave power devices, geothermal power plans, hydroelectric plants and tidal turbines. Even though there is an incredible combination of renewable and sustainable energy sources, a majority of the energy will actually be coming from local solar power (38%) and wind power (40%).

An incredible result of the plan and the study is that there will be a direct effect on healthcare costs. Not something that was previously factored in, however, the reduction of pollution and the negative effects on health has been calculated to actually pay for health costs within only a seventeen year period.

The New York Green Energy plan is one of the world’s most advanced plans to turn the tide on fossil fuel dependency and if it’s successful, will catapult the State of New York into a global leader of sustainable and renewable energy. The plan includes a complete revamp of the energy landscape, but there are some hurtles that have to be overcome. The challenge of addressing all venues of alternative energy is being faced with some daunting problems. Cost is the major issue, and without significant tax breaks or incentives the intention of trickling down the energy savings concept to the average individual will not happen.