Vermont’s state senate made history last week by passing a bill that would make the labeling of GMO (genetically modified) foods required by law. The bill is a landmark piece of legislation as no state has ever passed any such law regarding GMO products. 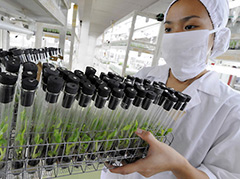 Not only did the bill receive near-unanimous support in the Senate, but one draft of it was already approved by Vermont’s House of Representatives as well. If all goes as planned, the law would go into effect at the beginning of July, 2016.


Unfortunately, this bill and other legislation like it have been met with opposition on the federal level. U.S. grocery manufacturers are throwing their support behind an opposing bill being pushed through Congress called “The Safe and Accurate Food Labeling Act,” which would outlaw any state bills requiring labels on GMO products. This opposition bill follows on the heels of legislation in Maine and Connecticut that would also impose label requirements in those states, but only after other states have adopted the procedure. The “Food Labeling Act” seeks to kill all such legislation in support of big businesses.

On one side, activists argue that bioengineered food and GMO product are health concerns for consumers looking for healthy alternatives. On the other hand, big businesses point to studies that show there is no supporting scientific evidence indicting GMOs as a health risk. Businesses oppose the GMO labels because of the additional costs and complications the labels would impose upon the food industry.

Similar measures appeared on ballots in California and Washington state, but both were struck down thanks to big-budget campaigns funded by Monsanto and other GMO developers. The Vermont bill is viewed as a potential catalyst because it contains no “trigger clause,” i.e. it does not hinge upon other states first adopting GMO labeling.

Legislation like the Vermont bill could strike a serious blow against an industry seemingly bent on providing the consumer with as little information as possible about where their food comes from. All food activists’ eyes will be on the Vermont legislature in the coming months, as the fate of GMO labeling hangs in the balance.