One of nature's most deadly and yet beautiful natural disasters are snow avalanches. Anyone that has ever witnessed any of the snow avalanches from afar is caught awe struck. Anywhere there is a large build up of snow on a mountain side will inevitably have a snow avalanche.

Snow avalanches are caused by the heavy fall of new snow on a compacted snow area. The new snow is fresh and filled with air pockets. The build up of the weight of the new snow becomes so heavy that it slides from the compacted snow. Snow avalanches can have a number of triggers that will cause them. Extreme loud noises like gun shots or loud shouting will cause sound waves that reverberate. Other causes can simply be the additional weight of a skier or someone climbing on the snow. 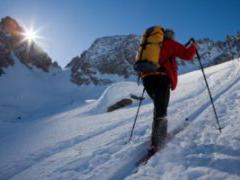 The build up of immense amounts of snow can be caused by varying weather patterns, from drought conditions to hard freezes. Sudden increased rain that turns to snow will cause an abnormal amount of snow to fall in given areas. Steep slopes have higher incidences of snow avalanches simply due to gravity.

From national preserves to ski lodges, people around the world have been developing methods to try to maintain or control snow avalanches. There are professionals that study the snow levels and cause deliberate controlled avalanches. This is often accomplished with explosives when any danger to other people has been removed. In some areas the installation of snow sheds has offered a good alternative. This is a build up of rocks and material to produce a type of fence at the base of a potential avalanche area.

When people are present during a snow avalanche it is a race to escape it. Many skiers and snow boarders have tried. Some have actually succeeded. If caught in the resulting snow of an avalanche, it is almost impossible to move in the snow. The density of the snow around the human body is so tight that even the smallest movement is difficult. In many parts of the world, dogs have been trained to seek out those that might have been caught in an avalanche. There is a short time limit to find them because the cold will cause hyperthermia very quickly. If you are caught in an avalanche and there is no escape, it is advised that you keep moving to keep clear some air space for breathing and punch towards the sky to clear the snow. You can be found easier if there is part of the body exposed above the snow. Ninety three percent of victims of a snow avalanche have survived if they are found within fifteen minutes of the avalanche.