The loss of the tropical rainforest would be a major catastrophe for mankind. It has taken this forest millions of years to grow, and the trees are an important source of clean air and precipitation for the entire world. The rainforest can not be replaced once it has been cleared, not for millions of years. The loss of the rainforest could have devastating ecological effects on the entire earth, and every human on it. The destruction of the rainforest is responsible for the loss of plant and animal species that are not even known yet, at the rate of tens of thousands of species every year. The cure for cancer, AIDS, Alzheimer's disease, and millions of other medical conditions may be present in the rainforest, and these species could be wiped out without ever being discovered. It is important that steps are taken to protect and preserve the rainforest before it is too late. The loss of the tropical rainforest would be the biggest catastrophe for mankind possible. 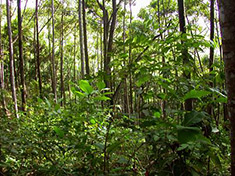 The tropical rainforest is one of the most important resources on earth, and the loss of this rainforest may be an enormous catastrophe for mankind, for many reasons. The rainforest is virtually untouched, with millions of acres of pristine land that may hold the secrets to many mysteries, and the cure for many different diseases. Every year, between twenty seven million and sixty million acres of rainforest are destroyed, for timber, ore, and other resources, and this can never be brought back. More than two thirds of all known plant and animal species exist in the rainforest, as well as many more species that have never been seen by modern man and are still unknown. The rainforest contains native tribes of people who still live as they did hundreds of years ago, and have never had contact with the outside world. The rainforest may hold the plants which will prove to be a cure for cancer and other diseases that are not currently curable. New species of plants and animals are discovered all the time by scientists doing research and looking for these things in areas of the rainforest.

The rainforest not only acts as home to numerous plants and animals, this dense forest provides an enormous amount of oxygen to the atmosphere of the earth, and removes an unbelievable amount of carbon from the air through natural processes. If the rainforest is gone, there would not be enough oxygen made, and carbon emissions into the air would not be filtered out. The loss of the tropical rainforest would be the biggest catastrophe for mankind that has ever occurred. The rainforest has given mankind many gifts, including medicines, rubber, chocolate, gum, and millions more, and it must be protected at all costs. The loss of the rainforest would be a tragic turn of events that could have a drastic effect on mankind and the entire earth.

Part of the deforestation of the rainforest is done for timber, and there are exotic species of wood including mahogany, teak, and rosewood, that are very sought after because of their beauty and rarity. This needs to stop, because no kitchen cabinets or trim in any home is worth the destruction of even one acre of rainforest. The rainforest is also very rich in ores, and this is another cause of deforestation, so that miners can get to the ore underneath the earth located in the rainforest. Farming is the third biggest reason for the loss of rainforest lands. As the earth becomes more crowded because of the population growth, more and more people are living next to the rainforest, and encroaching on it.