With all of the media and much political attention in the United States you'd think American would be the leader eco-friendly buildings and green building material. Unfortunately, green architecture abroad has become much more commonplace in foreign countries, especially in Germany, the Netherlands, and other countries throughout Europe. 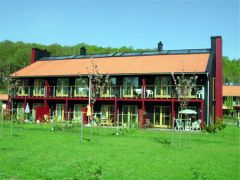 In Germany, green building material are utilized so much that eco-friendly buildings are now an everyday reality. Another interesting fact is that the average building in Germany uses a third less energy than the average building in the United States. For more than a decade, European countries have been tightening down on environmental guidelines, which have resulted in green architecture abroad far outpacing that of the United States. The Netherlands has been using green architecture almost due to necessity. Much of the country is below sea level, and the decision to build green as well as one of the world’s leaders in energy efficiency and renewable energy comes hand-in-hand with their everyday existence.  Great Britain began offering tax incentives for green architecture quite some time ago and implemented all new government and educational structures under the requirements of green building.

Other countries that far out-pace the United States in green architecture include many Asian countries such as Japan and China, as well as Africa and India.  In some of the countries the decision to build green was simply due to the fact that they are emerging and growing countries, in others it was a conscious choice.

The United States has yet to come up with universal efficiency guidelines for buildings. Some estimates contend that buildings use as much energy as the transportation and industrial industries put together. Green architecture abroad is much more prevalent than in the U.S. mainly because of priorities. As green building lost steam in the U.S. in the 1980s it was really gaining momentum in Europe. Corporations in the U.S. saw little need to use green building material or make eco-friendly buildings. By contrast, the E.U. and national governments in Europe play a big role in building design and have made green building a priority. It is quite evident that greener pastures lie over in Europe and the United States is lagging behind. But with all the media hype and the current Administration backing green, the gap may be closing fast.