Geothermal energy is environmentally friendly. Geothermal power plants do not use fossil fuels for electricity generation and produce emissions levels that are less than 1 percent of the emissions a fossil fuel plant will release. Geothermal energy is completely renewable because the rain provides water and the earth provides heat. There are no dangerous chemicals used or byproducts created, and these plants emit significantly less sulfur as well, which is the main component in acid rain. Some geothermal sources have become famous, such as Yellowstone National Park, which is littered with geyser and fumaroles that occur naturally. These areas are protected to prevent any damage or harm to them. Geothermal energy may be the answer to ending dependence on fossil fuels. 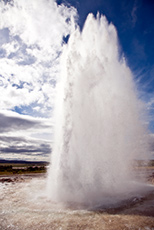 What is geothermal power? We have all probably heard about this before, but most of us do not understand what it means or how geothermal power can help combat global warming and renewable energy needs. The word geothermal comes from the Greek words for earth and heat. This energy is created from heat inside the earth. Geothermal energy is renewable and does not create harmful emissions like fossil fuels produce. The source of geothermal energy is water, which is heated up or turned into steam by the heat inside the earth. This energy can then be used to generate electricity and heat buildings instead of using natural gas or coal.

The core of the earth is divided into two distinct layers: a solid layer and a molten rock layer called magma. The mantle is the next layer and is around 1,800 miles thick. The mantle completely surrounds the outer core. The last layer is the crust, which encompasses the sea floors and the land on which we walk. The crust of the earth is divided into plates and there are spaces or gaps between these plates. In the spaces between the plates, liquid rock or magma can come up to the surface of the crust. This results in a volcano. The deeper you go into the earth, the higher the temperature becomes because water and rocks are absorbing heat from the magma.

Geothermal energy is used around the globe for heat and electricity production. Sometimes this is done by digging a deep well and using a pump to bring up the heated water or steam. This energy can be found in many areas of the world, and many of the geothermal reservoirs are hidden deep within the ground with no sign of their presence. Sometimes though, geothermal energy will find a way to escape to the earth's surface in the form of a volcano, fumarole, geyser, or hot spring. The major surface plate edges are where the most geothermal resources can be found because these areas are where the magma and heat are closest to the crust of the earth. These areas can also have many volcanoes and frequent earthquakes because the plates sometimes shift. The rim of the Pacific Ocean is a large geothermal energy source and is called the Ring of Fire because of the closeness to major plates and the large number of volcanoes and seismic activity in the area.