Sad news emerged in the environmental world this week as a new study revealed that poachers have been responsible for approximately 100,000 elephant deaths in Africa from 2010 to 2012. The elephant death rate has gone up dramatically in recent years, primarily due to rising demands for ivory in Asia. 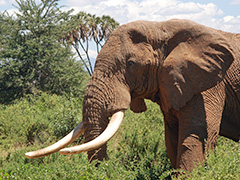 Before this study, no other scientific research has been used to quantify the number of elephant deaths in African nations. Alarmingly, the study also concluded that 65% of all elephant deaths in the continent resulted from illegal killings, a number that rose from only 25% a decade prior. Experts predict that if that rate of increase continues, it will spell certain extinction for the African elephant.


Indeed, some of the death toll numbers are absolutely staggering. The Selous Game Reserve in Tanzania has lost roughly 27,000 elephants in just the last three years. Central Africa leads the continent in elephant killings, while Tanzania and Kenya are also near the top. In rare places, such as Botswana, the elephant population has somehow managed to increase during that time span.

Most experts blame a surge in China’s middle class for the increase in both ivory demand and street value. Each time ivory demand rises, new poachers are borne out of impoverished Africans who turn to this horrific criminal act for the steep financial gains.

During an event at which the Chinese embassy to Kenya donated anti-poaching equipment to several conservancies, the Chinese ambassador announced that the country has amplified its efforts to educate the populace about the ivory trade, and hopes to alter public perception of ivory in the country.

While some experts are hopeful that elephants - a resilient animal that persisted through a poaching crisis in the 70s and 80s - will survive and eventually flourish, as of right now, the situation grows more dire by the day.