Devastating Tornados: Can its power be harnessed?

An engineer from Canada by the name of Louis Michaud has created an artificial tornado that he has named the Atmospheric Vortex Engine, or AVE for short. This energy source can produce enough energy to power up a city that is small. This tornado engine will produce as many as two hundred megawatts of electricity, which is a significant amount. It is impossible to safely enlarge the vortex and increase the potential of the AVE without taking a chance that safety will be compromised. Further research and advances in technology may well end up making it possible that tornado engines are a power source for the future. 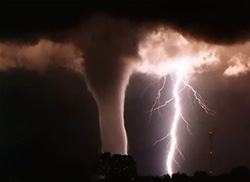 Devastating tornadoes have become more frequent in the past few decades, and these storms are full of incredible amounts of power that can be extremely destructive. Is it possible to harness this power and use it as an alternative energy source? There has been some research done into the potential that tornadoes have, and tornadoes have been created in the lab under specific conditions so that scientists can study how these storms act and how they can be used. Any potential energy source from tornadoes would probably be utilized with tornadoes created simply for their energy. It would be almost impossible to use tornadoes made by nature, because of their unpredictability and the extreme destructiveness of their power. It would be possible, however, to create tornadoes which are controlled in secure areas, so that their power can be used for energy instead of destruction.


The idea is that a tornado of moderate size could be contained in an enclosure that has turbine engines situated at the bottom. As the tornado circulates, the turbines will turn and create electricity. This is not without risks though, as even proponents of this idea will state. A tornado needs heat to stay powerful and to grow, so heat would have to be supplied in the form of warm air. Once the tornado reaches a big enough size, there is always the possibility that the storm can start to pull heat in from outside the system, allowing the tornado to become bigger than desired. Once the tornado reaches a certain strength, there is no way to shut it down or prevent the storm from destroying the enclosure and getting loose to wreak havoc on nearby towns and areas. Experiments with tornadoes and vortexes on a small scale have been done that show the significant energy potential a full scale vortex would have, but care must be used to ensure that the power generation method is safe before larger tornadoes can be used. This means developing ways to either reduce the strength of the tornado if necessary or to strengthen the enclosure to prevent the storm from escaping.
Devastating tornadoes may be the model for the power source of the future. These storms have no damaging emissions or greenhouse gases, which make them environmentally friendly in that respect. Man made tornadoes would also be a renewable and sustainable energy source that does not rely on fossil fuels, or damage the earth beyond repair. Tornadoes contain incredible amounts of power, and this power can be used to help solve both the ecological crisis and the economical crisis. Tornadoes as an energy source can be domestically created, so there is no dependence on foreign countries for fuel. Instead, our dependence on fossil fuels would end, and this has many benefits to both the environment and the economy. Harnessing the power of devastating tornadoes in nature may not be possible, but we can create these storms and harness their energy in this way instead.

3 Responses to “Devastating Tornados: Can its power be harnessed?”