New York City is truly the center of the universe. For centuries, people have flocked to the island of Manhattan in search of bright lights and big opportunities making it the most populous city in the nation. Of course, that means more congestion, more cars and taxi cabs, and unfortunately, more air pollution. For decades and decades, smog has been the price of a kinetic and thrilling life in the Big Apple. But what if that air pollution was actually clogging up the economy in the long run just like it’s clogging up the lungs of so many New Yorkers? 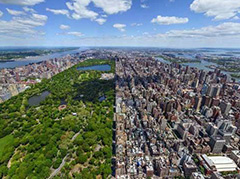 A new study estimates that reducing air pollution in NYC would result in a significant increase in the lifetime income of the next generation’s workforce due to IQs being less inhibited by the toxic chemicals that enter the atmosphere when fossil fuels burn. How big could the difference be? The answer is estimated to be by as much as $215 million.

According to an article by the ClickGreen staff on Environmental News Network, “The study is the first to estimate the costs of IQ loss associated with exposure to air pollution, and is based on prior research on prenatal exposure to air pollutants among low-income children by Frederica Perera, PhD, lead author of the current study, and colleagues at the Columbia Center for Children's Environmental Health at the Mailman School of Public Health. The researchers made their calculation using a hypothesized modest reduction of .25 nanograms per cubic meter air (ng/m3) of ambient concentrations of polycyclic aromatic hydrocarbon (PAH), a family of chemicals created by burning fossil fuels that is ubiquitous in urban air.”

The potential reduction of PAH by 25 percent is said to translate to the $215 million figure. Perera and colleagues said that they and their contemporaries have quite possibly overlooked the economic significance of reducing prenatal PAH exposure because it doesn’t include estimates of monetary gain or loss also associated with PAH like the overall neurotoxic, carcinogenic and respiratory effects.

And even though this study was done with children born to low-income New York moms on Medicaid, Perera and co-authors are confident that reduced PAH would affect all kids in a similar way. After all, IQ is heavily stressed in the math and science-centric curriculum of most American academic institutions.

Posted on May 12th under Pollution Reduction.
Permalink | Comments (0) | Technorati — View blog reactions | Save to del.icio.us