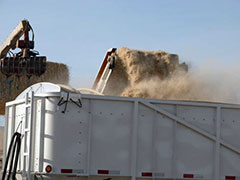 Biomass energy production is considered as one of the greatest prospects for the green low carbon future. Many researchers are currently focused on the generation of energy using biomass, and on
the economic challenges involved. The origin of the biomass, the logistics, as well as storage and handling make up an entire energy supply chain with a large number of variables.

The biomass conversation supply chain is not yet developed. Many of the transportation, storage and handling systems that are required still need to be set up. For biomass conversation to be cost efficient, existing infrastructure and technology needs to be leveraged in the meantime.

Power plants need to be located near sources of biomass. The huge amount of product needed to run a large scale power plants means that this would significantly effect the overall cost of the energy generation.

An important issue that biomass power plants face is that a continuous supply of fuel is not guaranteed. For this reason the facility needs to be able to process a variety of biomass fuel types. Enormous quantities of biomass are required, and transportation, storage and handling costs are high. For instance, it costs nearly 3 times the amount to transport wet wood chips for biomass fuel than coal, and 5 times the amount if the chips are dry. Densifying biomass for transportation is an option. This in itself is an additional expense, but worth considering if the biomass needs to be transported a long distance. Densification reduces moisture and significantly increases the density of the material.

In the Pacific Northwest the estimated cost to generate electricity from biomass conversion (biomass feedstock energy) is around 6 cents per KWh. This is quite high when you consider that a gas-fired power plant produces energy for less than 3 cents per KWh. However, many factors such as those described above can heavily influence the cost of biomass energy production. In addition, new gasification technologies are likely to reduce the cost of biomass power generation in the future. Biomass feedstock energy can become more cost effective by developing particularly cheap to produce sources of biomass such as rapeseed oil The design of the facilities and the location of the station is of great importance too. All this can bring the cost of biomass energy production down to a level which is competitive with current methods of energy production.

When talking about “costs,” the environmental cost is at least as important as the economic cost. The world is taking the first tangible steps to moving away from a carbon based economy, and the development of biomass energy production is one important step in this direction. Coal power stations emit vast amounts of carbon and pollutants Gas power stations also pump large amounts of carbon into the atmosphere. Nuclear power stations produce hazardous radioactive components. Biomass power plants are much cleaner and emit much less carbon. In time they may become the predominant method of energy production.