Alternative energy production took another small progressive step recently when the first commercial cellulosic ethanol plant made its debut during a grand opening in Iowa this month. Dubbed Project Liberty, the plant, which costs roughly $275 million, is backed by South Dakota ethanol giant POET, as well as a Dutch group called DSM. Cellulosic ethanol derives from biomass like corn stalks and leaves, as well as other forms of organic waste, much of which is collected after a corn harvest. 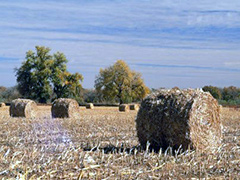 The cellulosic ethanol initiative holds a great deal of environmental promise, as it can reduce emissions by up to 86% compared to regular gasoline. In fact, Project Liberty is only the first of three separate, major cellulosic ethanol projects in the U.S. planned for 2014. Industry giant Dupont is even scheduled to enter the fray with a new plant expected to produce 30 million gallons per year. While supporters of biomass-based ethanol hail Project Liberty as a triumph, numerous obstacles stand in the way of cellulosic ethanol’s success.

For one, a great deal of expense has gone into the development of new technologies needed to derive ethanol from the collected waste and other materials. Another problem is that the gasoline pumped by consumers only contains up to 10% ethanol, which means that there is a finite, and potentially small amount of cellulosic ethanol that can actually be sold and used on the U.S. market.

Yet another issue concerns the value of the corn stover (the term applied to the stalks and leaves left over after a harvest) to farmers and their land. A study showed that the removal of all of the stover after a harvest can actually be destructive to the soil, decreasing a farmer’s ability to grow corn there. Therefore, harvesters of biomass are limited to removing only about 25% of the stover and storing it, not to mention that special baling equipment must be used to accomplish this, meaning many farmers are unwilling to take on the risks of the whole process.

On top of all the concerns regarding cellulosic ethanol listed above, oil lobbyists convinced the EPA to lower its targeted gallon amount of the ethanol from a robust 1 billion gallons to a paltry 1 million in 2013. Although 2014’s target was raised to 17 million gallons, the powers that be have manufactured low expectations for the new fuel source. Despite the odds stacked against them, POET hopes to produce 14 million gallons out of Project Liberty in 2014. With more projects sprouting up later in the year, cellulosic ethanol may still prove to be a somewhat common, viable source of fuel production in the very near future.