A hybrid car engine can use many different hybrid technologies, and some are more environmentally friendly than others. Some hybrid electric engine cars do not use the electrical engine to use less fossil fuel, but merely to help boost the performance of the car. Other hybrid engines use electricity or hydrogen fuel cells as the main source of power, using fossil fuels only when necessary. The level of environmental friendliness of a hybrid engine will depend on many different factors. Some hybrid engines may produce little or no harmful polluting emissions, and use very little fossil fuels. Other hybrid engines will have large amounts of emissions and use fossil fuel as a primary energy source, and these are very unfriendly ecologically. 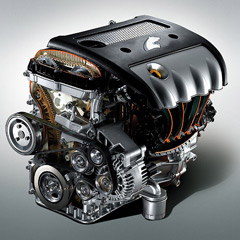 Are hybrid engines really environmentally friendly? Are hybrid car emissions less harmful or polluting than traditional gas only car emissions? Hybrid engines and cars are being looked at as the future of the automobile, and there are a number of types of hybrid cars. Determining whether hybrid engine technology is more friendly and less harmful to the environment depends on the specific hybrid engines and technology. Electric cars are being examined closely, to eliminate the need for gasoline or diesel fuel completely. But how is the electricity that is used to power the car created? If the electricity is created in a coal plant, then the car is not environmentally friendly because the source of energy used is polluting and very environmentally harmful. If, on the other hand, the hybrid electric engine is powered by electricity created from wind or solar power, or another alternative energy source that does not pollute, then the hybrid car emissions are much more friendly when the total emissions used to power the hybrid engines are considered.

Hybrid engine technology can also use hydrogen fuel cells, which use hydrogen for power instead of traditional fossil fuels. Hydrogen can be used pure or diluted. Hydrogen hybrid engine technology can use a gas tank which stores pure hydrogen under high pressure. A full tank may be able to take the vehicle up to two hundred miles, without needing a refill, and hybrid engines can use gasoline or diesel for times when no hydrogen refueling stations are available. There is research into developing tanks which can utilize more than five thousand pounds per square inch of pressure, which is the current tank maximum. Hydrogen is used to produce electricity, and these hybrid car emissions are close to zero. Hydrogen fuel cell vehicles can also use other fuels which are rich in hydrogen, including natural gas, methane, and some fossil fuels. These hydrogen rich fuels must go through a reformer that is on board the vehicle, and this extracts the pure hydrogen from the fuel. This pure hydrogen is then used to power the fuel cell. The reforming process that is performed when fuels other than pure hydrogen are used in fuel cell vehicles does emit some carbon dioxide, which is a greenhouse gas. The emissions are far less than what gasoline engines cause though, so even using fuel cell hybrid engines would result in much less pollution and emissions than not using hybrid technology.
The fact is that the world is depleting the natural sources of oil and other fossil fuels, and many of these remaining sources are under the middle east. America must stop our dependence on foreign oil, and hybrid engines can help do this while also reducing and eliminating pollution and greenhouse gas emissions at the same time, as long as the right right types of hybrid engine technology is used.

One Response to “Are Hybrid Engines Really Environmentally Friendly?”