It is now a confirmed fact that in Antarctica the impact of global warming is greater than anywhere else in the world. There has been an almost 5 degree F rise in temperature over the past 50 years in Antarctica, and it is leading to a shrinking of the surface area thickness of the ice shelves, of which the continent largely consists. The following are some of the latest Antarctica Global warming facts and the global warming consequences of the impacts on its flora and fauna. 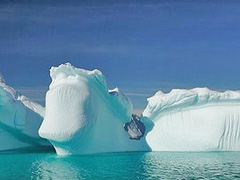 The first to give clues of oncoming danger are the “dinner-jacketed” penguins, who seem to be suffering more than others, as they like cold temperatures more than most other species of penguins. Next in line are the Adelie penguins, many of which seem to be dying out, as they reside in the more northern part of Antarctica. Since the peninsula as a whole has been observed to have warmed up faster than anywhere else in the world, one of the global warming consequences is that the food supply of these penguins is being disrupted.


The sea fauna has suffered somewhat as well. The Southern Ocean temperatures have risen by more than 1.5 degrees F over a period of 50 years, which has affected Antarctic sea urchins more than any other species. The temperature increase has forced them to search for better living conditions elsewhere. Among other ocean species affected by the Antarctica global warming facts are the Krill, which are shrimp-like crustaceans who require polar ice caps in order to reproduce. The temperature rise decreases the size of the ice cap and takes away the shelter available for the continuation of the species. Krill are important to the fauna, because they serve as a food source for various Antarctic mammals and birds, such as seals, penguins, and whales. As the reduction in the krill population continues, other animals up the food chain are affected and become subject to starvation.

Another species that seem to be in danger in the Antarctic region is the limpets, which are a type of snail in the region. What happens when the temperature of the water increases is that when they are flipped over, limpets are no longer able to turn themselves back up. It’s important to point out that skill is crucial in order for them to survive in an environment where icebergs prevail.

However, despite all of these Antarctica global warming facts, it’s important to note that penguins (which are some of the most important species of the continent) are not dying out and they are not under threat of extinction. There are millions of them around, and there is even one particular kind that seems to be enjoying the increase in temperatures, which is the chinstrap penguin. Nevertheless, most other penguins are suffering, and these are the ones that provide a big warning about the global warming consequences. To read more about the impact of global warming, click here..