The National Oceanic and Atmospheric Administration (NOAA), a government agency, recently released a report that ranked the severe weather events of 2013 according to historical statistics and other comparable events. The NOAA noted that the first 13 years of the 21st century have been among the 15 warmest years in the entire 134 year period that records have been kept. Several major events of 2013 are considered by the NOAA to have record-breaking, historical significance, with the administration pointing to these events as exemplary of the effects of climate change. They are: 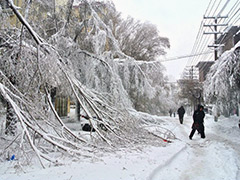 1. The California drought - The NOAA blames a high-pressure system hovering above the region for the Golden State’s worst drought ever. California’s position as an agricultural juggernaut makes this event particularly devastating.

2. Heavy rains in China and Russia - Many towns in these two countries experienced the worst flooding in well over 100 years, and one town even saw half its annual rainfall in just one day.

3. Australia’s warmest year - 2.16 degrees Fahrenheit. That’s the increase felt by Australians in 2013, making it their warmest year ever, and one which offered little relief after coming off of the country’s “Millenium Drought” - a decade long water shortage.

4. Arctic and Antarctic sea ice shrinking - Ice in both of these regions reached record-breaking lows, including during growth season in the Arctic, during which time the Arctic ice was at its six lowest point ever since record keeping began.

5. Typhoon Haiyan - The Philippines were devastated by this record-busting typhoon with winds of 195 miles per hour. 5,700 people died, and 11 million more were affected.

6. The UK’s cold spring - Northern parts of the country drew snowstorms well into late March, making 2013 the region’s coldest spring in over 50 years.