Wind energy facilities are popping up all across the U.S., and for good reason. They offer an alternative to fossil fuels by leveraging one natural resource we have an abundance of: wind. This is great news for us and for the planet on the whole. Except, it turns out this isn’t such a great thing for bats. 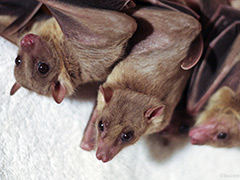 According to a recent study’s findings published in the journal BioScience, more than 600,000 bats were killed by wind turbines in 2012, and this number is probably on the lower side of the truth.

Why should we care about bats, anyway? Vampire movies and television shows aside, actual bats are kind of creepy. If some of them die, is it really that big of a deal?

It turns out that it is. Bats are integral to our ecosystems. Bat Conservation International states on its website that bats actually play a key role in controlling pests that would otherwise seriously harm certain crops, including artichokes, watermelons and cotton. Bats are estimated to save more than $3.7 billion a year in crop damage and pesticide use. In addition, there are some crops that depend on bats for pollination, including bananas, peaches and cloves. Bats are also said to have a role in dispersing seeds for avocados, dates, figs and cashews.

Okay, this issue has our attention. Let’s hope that it catches enough attention so that adequate research is done to identify ways to reduce and prevent bat deaths from wind turbines.