Wind farm investments in Scotland set to surge – Which Companies stand to benefit?

The offshore wind sector in Scotland is taking off. Recent reports by the European Commission show that, as of February 2011, the Scotland wind farms industry has been given a huge boost thanks to a promise of $45 billion in green investments over the next ten years. 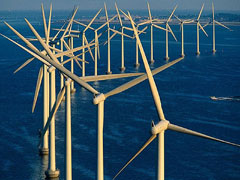 This could well turn this industry into a major part of Scotland's economy. The government has given its commitment to the industry, and the next ten years the technology Scotland wind farms is going to develop, and the installed capacity is set to increase dramatically. In the next decade, it is estimated that 26,000 jobs good be created in Scotland in the green energy sector.


So who are the major players in the wind farm investment sector in Scotland?

Gamesa is one of the big companies with grand plans for Scotland. It has announced that in Glasgow it will construct an offshore wind technology center, and in Dundee it will begin manufacturing turbines.

Mitsubishi Power Systems Europe is another company with big green investment plans for Scotland. It will invest more than $150 million into an offshore wind research and development center, with the intention of creating a mass production facility for low-cost offshore wind technology.

Scotland is set to play a key role in the development of green energy production in Europe, and this has been recognized by the report by the European Commission, in which it praised Scotland's desire to become a major force in the offshore wind farm industry. The report highlighted that Europe needs an integrated grid so that it will be easier for countries to purchase renewable energy from each other. In fact Scotland is working to create a North Sea grid, along with 9 other countries, so that it can export excess power.

Scotland is a perfect example of how offshore wind farms, wave, tidal and onshore potentials can be combined to produce a large amount of power. Experts have calculated that by 2050, the offshore capacities in Scotland will reach an impressive 68 gigawatts. Green investors will do well to research further into the companies such as Gamesa and Mitsubishi Power Systems Europe, as their prospects look very bright indeed.

For more information on wind farms, go to: