Photovoltaic solar panels are very special because these are solar panels for electricity generation, and they provide a method of generating green electricity. These panels include photovoltaic cells, which are made to transform the energy of the sun into electricity because of negative and positively charged silicone wafers which are paired. When the rays of the sun hit these cells it causes electron activity to occur, and this electrical energy is caught and transmitted by the electrical contacts arranged in a fine grid. The rear portion of the photovoltaic solar panels includes a junction box, and electricity that is direct current is what is received. This will travel along a cable to the location where it will be either used or stored. 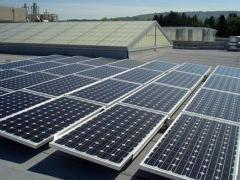 One Response to “What Makes Photovoltaic Solar Panels so Special?”