What is PFTBA and why is it in Our Atmosphere?

New research conducted by scientists at the University of Toronto and funded by the Natural Sciences and Engineering Research Council of Canada has discovered a previously unidentified greenhouse gas called perfluorotributylamine (PFTBA for the sake of universal brevity). The Department of Chemistry team, including Professor Scott Mabury, Cora Young, and Angela Hong, published their findings online at Geophysical Research Letters in late November. 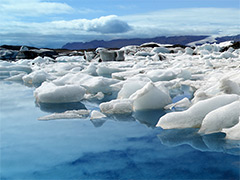 PFTBA is notable for two reasons. 1) It is the most radiatively-efficient chemical ever found meaning it breaks all other chemical records for its potential to affect the climate and 2) we have no one but ourselves to thank for introducing PFTBA to the ecosystem, as it occurs nowhere in nature.

According to a recent article from the Environmental News Service, “PFTBA has been in use since the mid-20th century for applications in electrical equipment. It is used in thermally and chemically stable liquids marketed for use in electronic testing and as heat transfer agents. There are no known processes that would destroy or remove PFTBA in the lower atmosphere, so it has a very long lifetime, possibly hundreds of years. It is destroyed in the upper atmosphere.”

“PFTBA is extremely long-lived in the atmosphere and it has a very high radiative efficiency; the result of this is a very high global warming potential,” said Hong.

This is just what we need to think about after experiencing some of the hottest years and wildest wildfires in recent history. We thought we’d targeted the main culprit with CO2, but maybe that isn’t the whole story.

“Calculated over a 100-year time frame, a single molecule of PFTBA has the equivalent climate impact as 7,100 molecules of CO2,” Hong added.
Scary stuff.