Earlier this month, Washington State voted against a bill that would have required the labeling of foods with genetically modified ingredients. The bill, Initiative 522, was largely opposed by the Grocery Manufacturers Association (GMA). 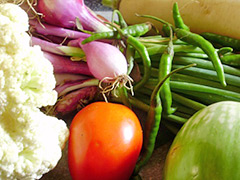 The GMA is made up of 300 different food, beverage and consumer product companies, and it spent millions of dollars on a campaign against the bill.

What’s interesting to note is that before voters hit the booths, the GMA was actually being sued for illegally shielding which companies were funding recent donations to the “No on Initiative 522” campaign. These companies were eventually disclosed and turned out to be the likes of Pepsico, Coca-Cola, NestleUSA, The Hershey Company, General Mills, Kellogg Co., Bimbo Bakeries, Del Monte and Campbell Soup.

Click here to read more about this lawsuit: http://www.bionomicfuel.com/is-your-meal-genetically-engineered/

Despite the illegal activities, the organization prevailed. According to an article by the Environmental News Service, the GMA’s president and CEO, Pamela Bailey, said the organization took a stance against state-specific regulation on labeling GMO products.

“Because a 50-state patchwork of GMO labeling laws would be confusing and costly to consumers, GMA will advocate for a federal solution that will protect consumers by ensuring that the FDA [U.S. Food and Drug Administration], America’s leading food safety authority, sets national standards for the safety and labeling of products made with GMO ingredients,” said Bailey.

Something tells us that if a federal-mandated labeling initiative came up, this organization would still be against it.
Though the FDA currently has no plan for this, proponents of food labeling are hopeful.

”Food labeling is a new political movement that will not go away,” said State Senator Maralyn Chase, chair of the “Yes on I-522” campaign. “Mothers across this state, and increasingly across America, want to know what’s put into their kids’ food.”

While this issue has been put to bed for now, there’s no doubt that it will continue to creep up. When it does, we should be ready for all the stops the GMA and other organizations are likely to pull out.