Tsunami Wave: How It Is Formed? – Updated Article With Extra Information.

As larger tsunami’s occur in our time, more people are focused on the causes of tsunamis. New scientific data adds light to how a tsunami wave occurs and the new areas that they can happen. 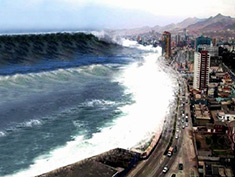 Ever since the famous 2005 tsunami wave that hit Thailand and its surrounding islands, tsunamis have been given great importance and rightly so. Tsunami waves are among the worst disasters that
nature can throw at us in all its furious glory, and since the 2005 disaster special attention has been given to the science of the formation of tsunami waves, so as to form a fool proof warning system which all islands and coastal areas can implement. These warning systems provide a “heads-up” signal in case of a tsunami, although they can only give a warning a few minutes before the event, but sometimes a few minutes is all you need to save countless lives. So, let’s look into how tsunamis are formed.

Let’s start with a mental visual of a tub of water to better grasp the concept of tsunami formation: visualize the tub filled almost to the rim, now take a cup and submerge it into the water upside down such that the air is still trapped inside the cup when it is submerged. Now, slowly turn the cup right side up under the water. What happens? Water rushes into the cup to fill the vacancy and bubbles form and come to the surface making miniature waves (or big ripples). Now imagine that the cup is actually the sea bed, and the ocean is rushing into fill the vacant space.

In scientific terms, a tsunami is a seismic sea wave which is the result of any sudden change in the seabed. These sudden changes can be in the form of an earthquake, a landslide, a volcanic eruption or a meteorite impact. A tsunami caused by a meteorite impact is extremely rare. The most common is by an earthquake. Earthquake generated tsunamis occur at areas where the earth’s tectonic plates meet. In such tsunamis, the earthquake moves these tectonic plates which creates pressure and pushes the water above. Therefore, tsunami waves are then formed when the disturbed or displaced water, driven by the gravitational force, tries to find a stable position once more.

Tsunamis formed by landslides also follow the same pattern as the tsunamis caused by earthquakes. The only difference is the fact that under water landslides occur as a result of an earthquake. Therefore, even when a tsunami is created due to an underwater landslide, the culprit is an earthquake and hence, is going to be situated along the boundaries of earth a.k.a tectonic plates.

Tsunamis caused by volcanic eruptions can be explained through a simple example of a boiling a pot of water. When you boil water, what happens? Violent bubbles start to form which soon take the shape of violent waves. When an underwater volcano erupts, it displaces a column of water and overheats it. The result on the surface is a tsunami.

In essence, tsunamis are formed because of the water’s attempts to find a stable position (to settle) again, under the influence of gravity.

6 Responses to “Tsunami Wave: How It Is Formed? – Updated Article With Extra Information.”