With more and more electric cars on the road, we can assume that they will also be involved in auto accidents. Since firefighters are usually first responders, they need to get additional training on the differences between standard, hybrid and electric cars. Tesla Motors has stepped up to the plate to donate their Model S for firefighters to use in practice emergency situations.

There is a pretty good training video for firefighters, using the Tesla Model S to demonstrate how to use the jaws-of-life hydraulic rescue tool to assist in getting people out of the car after an emergency crash. Understanding the various electrical components of an EV (electric vehicle) is critical, because a firefighter needs to be aware of potential dangers that are in the EVs as compared to a regular automobile. Operational considerations include the high voltage components as well as overall construction differences. 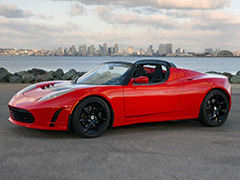 The forty minute video isn’t a complete demonstration, but it is used along with more detailed instruction that is given by a qualified electric vehicle instructor. Tesla has made their name as one of the top EV manufacturers in the world and has maintained quality and integrity while keeping up with the technology needs of a growing EV market. By donating their Model S version, they are not only doing a good deed, but getting public relations and excellent exposure to markets that they might not previously had the ability to preview. The Tesla brand has continued to be elevated and associated with excellence on a global scale, and it’s anticipated that they will be the benchmark example for other automotive manufacturers. Giving firefighters the ability to save the lives of others while understanding the complexities of an EV is yet another great move on the part of Tesla Motors.