The Slavery of a Bee 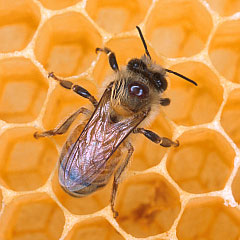 As I mentioned in my previous article, Top 5 Causes of Colony Collapse Disorder, there have been a number of different theories posed about what's causing colony collapse disorder – the mysterious and massive disappearance of pollinators which strains our environment and global economy. In making the film, American Colonies: Collapse of the Bee, I was lucky enough to learn about several of these hypotheses including viruses, mite infestation, a lack of good nutrition and the use of systemic pesticides/fungicides. However, one of the most interesting and recent suggestions is the lack of genetic diversity that has developed over a century of industrialized beekeeping and mono-cropping.

According to "Buzz Off" by Morgen E. Peck in the October 2009 issue of Discover, "In the beginning, honeybees and their partners, the flowers, drove an explosion of natural diversity. While most bees preferred a specific type of plant, honeybees were equal-opportunity pollinators."

The egg-laying queens of these intricate honeybee colonies bred with more than one male drone from a series of other colonies allowing for variation. This mirrors human society. The natural course of events is similar to the growth of our most diverse and exciting cities and port towns. In a sense, the bees were free to fulfill their role like immigrants colonizing a country.

"All that began to change in the early 20th century, when farms and orchards started enlisting honeybees to pollinate their crops. Bees that were adapted to harvesting pollen from a variety of plants suddenly spent a month or more at a time surrounded by nothing but almond or apple trees. Farmers eager to increase their crop yields turned to commercial beekeepers, who offered up massive wooden hives stocked with queen bees genetically selected to produce colonies of good pollinators. These breeding practices slashed the genetic variety that helps any species survive infections, chemicals, and other unforeseen threats."

Once again, it is easy to find a parallel in human societies. The lack of genetic variation in the aristocracies and dynasties of old left descendents susceptible to bacteria, infections and accelerated their extinction. The same practices of inbreeding and isolation are now hurting the bees, which in turn, threatens our environment and existence as well.

Perhaps you, the reader, can decide for yourself what you think is causing CCD. Experts and scientists across the U.S. seem to agree that none of the above causes are solely responsible. It is more likely a combination of all factors. However, this lack of genetic diversity is unique in that fixing the situation would entail dismantling the 20th century concept of agriculture. How long and how many generations would it take us, as a civilization, to bind together and organize a more permacultural approach to farming and beekeeping? How much profit and convenience would we have to sacrifice? Would we withstand the transition?

(**Article provided by guest columnist Jason Kushner. Jason has recently won an award for his documentary film American Colonies: Collapse of the Bee. He will continue to provide more articles on this subject as his research continues.)

3 Responses to “The Slavery of a Bee”