"If the bee disappears from the surface of the earth, man would have no more than four years to live" – Albert Einstein? 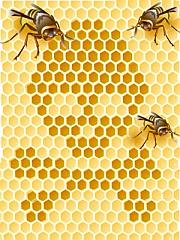 Beginning any article about the disappearance of honeybees and other pollinators with this controversial Einstein quote is merely a good, if not sensational way to grab attention. But seriously, the issue itself is real. Unlike other environmental crises involving climate change, renewable energy sources and so-called "green" initiatives, the ecological and economic implications of Colony Collapse Disorder will rear their ugly heads in only a few short years if unaddressed. After all, a third of the food we eat – including fruits, vegetables, almonds, milk, etc. – can be attributed to the continually amazing honeybee and the overall importance of honeybees.

Between political games, scientific puzzlement and general ignorance, the issue of colony collapse disorder has been muddled with spin and misinformation, as my recent American colonies movie demonstrates. For example, researchers at Pennsylvania State University confirm that cell phone signals never played a role in the disappearance of pollinators, contrary to countless news blurbs and unyielding word-of-mouth communication. That being said, I think it is important to update the masses about this crucial situation, a situation that concerns everybody. And, without further ado, here are the top five causes of Colony Collapse Disorder (in no particular order) as of October 2009:

1) PESTICIDES: In the old days, farmers and beekeepers would spray their crops with a pesticide (a necessary evil) and wash everything out. Then, a fungicide (another necessary evil) and wash everything out. But, in the early 2000s, chemical companies around the world began combining pesticides and fungicides in systemic tank mixes. The unforeseen synergistic effects of these chemicals continue to ravage the bees' immune systems as they attempt to pollinate. Will Big Agriculture sacrifice convenience and profit to control this problem?

2) ISRAELI ACUTE PARALYSIS VIRUS: Researchers at Penn State University, University of Montana and the USDA put this nasty virus at the top of their lists for CCD's root cause.

3) PICORNA-LIKE VIRUS: According to a recent issue of NewScientist, "May Berenbaum at the University of Illinois, Urbana-Champaign, and her colleagues looked for genetic differences between bees from U.S. colonies that have suffered CCD and bees that were sampled before colony collapses shot up in 2006. Berenbaum's team found 65 genes that were distinctly different in CCD bees. They also discovered unusual snippets of genetic material that are typical of infection with RNA viruses known as picorna-like viruses (Proceedings of the National Academy of Sciences, DOI: 10.1073/pnas.0906970106)." This moniker comes from the combination of "pico" (meaning small) and "rna" (referring to RNA). The idea is that this form of virus is what made the bees so susceptible to other pathogens. The aforementioned Israeli Acute Paralysis Virus is one of several of these picorna-like viruses that may be playing a role.

4) GENETIC DIVERSITY: According to the Discover's recent article "Buzz Off" by Morgan E. Peck, "Decades of agricultural and breeding practices meant to maximize pollinating efficiency have limited honeybees' genetic diversity at a time when they need it most."

5) OBSESSIVE LAWN CARE: Simply put, suburbanites don't plant enough flowers in their home gardens and use the same pesticides that farmers use to help maintain shallow neighborhood aesthetics.
More on these specific causes of CCD later…

(**Article provided by award-winning filmmaker and guest columnist Jason Kushner. His documentary film, American Colonies: Collapse of the Bee, tackles the phenomenon of colony collapse disorder and its effects on the environment and global economy. He will continue to provide more articles on this subject as his research continues.)