Leave it San Francisco and other progressive Bay Area cities in California to implement the equivalent of a Surgeon General’s Warning on gas pumps. Members of a West coast environmental group called 350.org (named after the goal of reducing atmospheric carbon-dioxide levels to 350 parts per million in order to ward off climate change) have approached city officials in Berkeley and San Francisco amongst other cities about slapping labels on pumps to make drivers more conscious of their gas consumption and oil addiction.
The Bay Area chapter of 350.org wants all local gas stations to display labels on pumps that say, "WARNING! GAS USE CREATES CLIMATE DISRUPTION," and while their hearts are undoubtedly in the right place, is this is a realistic and viable way to reduce fossil fuel addiction? 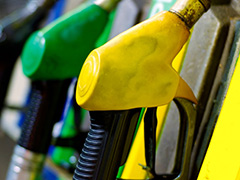 Jamie Brooks of 350.org thinks it is.

"There's no immediate signal to a consumer of gasoline to show their effects on climate," Brooks told the San Francisco Chronicle, “The goal is to create a signal saying, 'You need to change your behavior.’”

Here’s the problem. Even if Berkeley and San Francisco implement the labels, it’s still a small and merely local fix. And that’s assuming that drivers always read the labels, believe in their message and feel guilty enough to change their ways.

Again, consider the similarly severe warnings on cigarette packs. Consider the gruesome pictures of black lungs and cancerous body parts wrapped around packs in the European Union by mandate. Although smoking has decreased around the world (due mostly to rising costs and the advent of e-cigarettes), there are still plenty of Westerners who ignore the gloom and doom warnings and continue the habit.

And, therein lays the point. If large groups of people ignore warnings about their personal health, how can you expect them to heed warnings about the more abstract and nebulous realm of environmental health which has much less connection to innate self-preservation and in which the effects are felt at a much slower rate? Think about it.