Renewable electricity production is an important part of the future of energy. There are a number of renewable energy electricity technologies available that can help end the dependence on coal and fossil fuels without causing harm to the environment or contributing to carbon emissions and air pollution. Renewable electricity generation can occur from solar power, wind power, wave and tidal power, bioenergy, hydro power, hydrogen and fuel cells, and others. 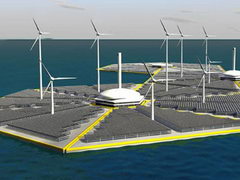 One method of renewable energy production that is hotly debated is nuclear energy, because of the dangers and risks that are involved with this energy technology. Some critics contend that nuclear energy is not an option and not a true renewable energy source. All other methods used for renewable electricity production are considered safe and come from natural sources of energy. Solar renewable energy electricity takes the heat and energy received from the sunlight and converts this into electricity. The disadvantage to solar electricity is that the sun is not strong enough at times, and there are long stretches, like winter and night time, when the sun is not out at all. Solar power systems used to require batteries to store the energy collected until it was needed, but new systems can be tied right into the utility grid to eliminate the need for costly storage containers and systems. This allows you to use renewable electricity when it is available, and to use electricity from the utility grid if solar or wind energy is not available for use at the time.

Renewable electricity generation can be done using wind energy. Wind power uses windmills and wind generators to convert the energy from the wind into electricity. For a windmill to be effective it must be placed in an area with high winds most of the time. This does not include a large area of the world, and wind power is also sporadic like solar power is. Wind can create renewable energy electricity, but it is not a steady stream large enough to meet demand without other methods being used in most areas.

One Response to “The exciting choices of renewable energy production technologies”