The 7 Big Mistakes People Making During an Earthquake – Part 2

The same principle goes for when you are outside. Running inside will only increase your risk of getting hurt, especially getting inside a building. The most dangerous place to be is just outside a building, because of the debris and shattered glass that is likely to result.

4. Crawling Out of Bed
If you happen to be in bed when an earthquake hits, don’t attempt to leave it, unless your room has a heavy fixture above the bed. According to studies conducted on earthquakes, staying in bed and covering yourself with a pillow will actually increase your survival chances.

5. Following the ‘Triangle of Life’ Theory 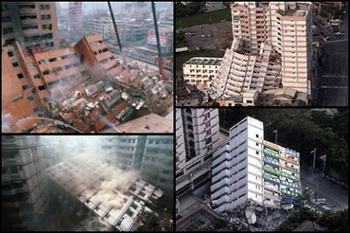 The ‘triangle of life’ theory has been gaining popularity as a safe method of survival during an earthquake. The theory states that when large objects collapse, voids are created next to them, usually forming the shape of a triangle. So, according to this theory, you should run for cover next to a large object, not under it. However, other studies show that it is virtually impossible to know beforehand where such gaps will occur, because the building can get damaged in a number of different ways. So, we advise against following this theory.

6. Rushing Outside When Already Inside
If an earthquake starts and you happen to be inside, you shouldn’t try to get outside. It will prove difficult to run, and the risk of getting hurt this way because of falling objects is much higher. Instead, find cover where you are.

7. Rushing Inside When Already Outside

Posted on May 23rd under Natural Disasters.
Permalink | Comments (0) | Technorati — View blog reactions | Save to del.icio.us