It once seemed that all of the exciting changes toward increased implementation of green solutions to sustainability problems could be found happening in metropolitan areas. Subsequently, it also seemed that younger demographic shifts away from sub-urban to urban areas fueled the migration politically. In other words, cities have the strength of their municipalities and income of their tax base to localize significant projects, and concentrate their impact per square mileage inside densely populated areas, so they always appear more progressive. New York City, Austin, Portland, Ashville, and Detroit (a rare tabula rasa of a once flagship American city), have all been tagged as torch bearers in leading projects highlighting alternative and sustainable growth. 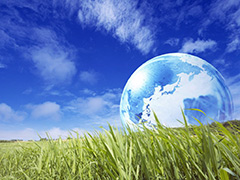 But this kind of progress has already been in the works, and as alluring as these city stages are for showcasing green initiatives, they are not the “end all, be all” of making a greener future more attractive. The consumer and the activistare both subject to are “in vogue” flavors of advertising. “Consider it a part we can all play, by simply switching to an Energy Star stamped appliance,” that advertisement might say never mind the fact that the standards for receiving an Energy Star label are practically give it away.

We suggest that the incoming generations of builders, activists, and growers look beyond the flooded city markets and consider rural life. While skyscraper terra-farming looks great on the cover page of the Atlantic, only wide open pastures can produce locally grown livestock. And, surprisingly, there is much more space for start-ups, whereas the systems in place for preserving the consumer supply chain in urban and sub-urban areas have entrenched political power. Rural areas are ripe as autumn Macintosh apples for new systems which aren’t reliant on the old guard’s insistence that supply systems be built around automobile transportation. Without a consumer based supply system built around established chain retailers and so forth, start-ups can introduce new systems to meet consumer demand, but build it sustainably, and rely on locally sourced material.

After all, we’re talking about new land development, and getting away from the modern division of sub-urban. In a rural setting, new initiatives can start to have real autonomy—with a place to stretch out and build from scratch rather than a lab in the basement, so to speak.