Stopping the engine of the world wide environmental crisis 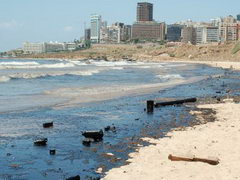 The environmental crisis in the world has already started, and it is having a big effect on every country. This crisis has occurred for a number of reasons, but there are steps which can be taken to stop this crisis and improve the environment. Many people and companies do not want the status quo changed, because they profit immensely from it. Coal burning power plants pollute the air and earth, yet pay no price for the greenhouse gas emissions and particle pollution that they profit from. The same is true for the big oil and other fossil fuel energy corporations, and they lobby with almost unlimited resources to keep energy changes from happening anywhere in the world. Alternative renewable energy sources are available, and have proven to be very environmentally friendly while also being just as efficient and effective as fossil fuels. Oil, natural gas, and coal are limited resources, and much of the oil left is under foreign countries. Recovering fossil fuels also damages the earth and environment, because mining, drilling, and leeching can destroy habitats, and poison the air, water, and land. The environmental crisis in the world can be turned around, but action must be taken now before the earth reaches the tipping point, and the damage can not be reversed.

The environmental crisis in the world is caused by many things. An increasing population, overconsumption of natural resources, deforestation of the rain forests, fossil fuel use, and garbage created by humans all play a part. Steps can be taken to resolve these issues, and keep from damaging the world even more. Switching to alternative renewable fuels and energy sources can eliminate carbon emissions which speed up the global warming and damage the ozone layer, as well as damage to the environment caused by the locating and recovery of fossil fuels. Biodiesel and ethanol can be created using biomass, and this biomass does not have to come from the food supply or use fertile land that could be used for food crops instead. Algae, some types of fungus, some types of waste, and many plant species can be used to create these fuels, without causing any food shortage or increasing world hunger. The environmental crisis in the world has already started, but energy conservation can still make a big difference as well.

Conserving energy can be done in many ways, and each step taken towards this goal will decrease the energy needed and consumed. Use energy efficient appliances, turn off the lights and televisions when not in use, and unplug appliances when they are not being used. Many homes have items like toasters and blenders which stay plugged in all the time, and even when turned off these appliances can pull electricity and use power in small amounts. Waste to energy programs can also help keep the current environmental crisis in the world from becoming worse. One environmental problem is the waste dumped in landfills, and this waste can pollute the environment while taking up large amounts of space. Highways, open land, and even the oceans are full of garbage, and this can be used to generate electricity. This process eliminates two of the contributing factors to the environmental crisis in the world, municipal waste and fossil fuel use. There are many ways to help the environment, instead of causing harm, while still generating the energy needed to prevent an energy crisis across the globe. Fossil fuel prices will go up steadily as the supplies dwindle, and these fuels do severe damage to the environment. Preventing their use would go a long way towards resolving the environmental crisis in the world right now.