One small step for wind turbine technology, but one giant leap for mankind

There are more and more wind turbines appearing all around the world, so it was just a matter of time before a creation like the Wind Lens would make its debut. This type of wind turbine technology can bring the production of energy offshore. It also expands the reach of eco-power and can create much more efficient energy. The new creation made its debut in summer 2010 at the Yokohama renewable Energy International Exhibition. 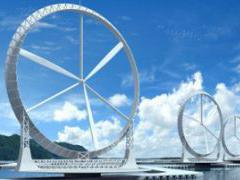 Designed by Yuji Ohya, the Wind Lens is a row of floating hexagonal hoops that interlock together, and have turbines on the edges. The wind is focused by the turbines into the center of each hoop, which generates a larger amount of energy. The Japanese government has conducted a feasibility study combining the offshore wind patterns and the ability to built cost effective electricity generators. The Japanese inventors took into consideration various disaster possibilities, such as giant sea waves, tsunamis, and typhoons, when designing the Wind Lens. The Wind Lens is projected to be installed by the government near to Japan’s shoreline within the next few years.

Thanks to Japan’s abundance of hot springs and volcanoes, in the past the country was able to derive a lot of its renewable energy by geothermal means. Currently, Japan has 18 power plants, which supply 0.2 percent of the country’s electricity. The annual report of the World Wind Energy Association states that wind power is now supplying 2 percent of the total energy worldwide. So, the Wind Lens technology is projected to have significant benefits.
To continue reading, click here.