After the recent disaster in the Gulf of Mexico, oil drilling pollution is a hot topic. The pollution caused by offshore drilling is on the conscience of more and more people. First of all, this is because all marine life in the area is affected by the oil drilling process, which causes various pollutants to be released in the water. Oil spills are also a source of serious damage, which harm not only marine life, but land plants and animals as well. Offshore drilling rigs also interfere with fishing activities all around. However, it is not just offshore drilling that causes pollution, because once the oil is recovered, it needs to be stored, transported, refined, etc. This leads to further risks of accidents and severe damage to the environment. 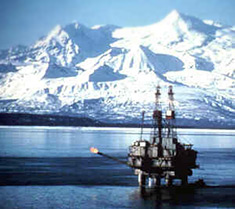 Pollution from offshore drilling starts right at the beginning of the process. Determining and testing where to place offshore drilling rigs is in itself very damaging to marine life. Oil exploration entails the use of seismic waves in order to identify if there are fossil fuel reserves under the area’s ocean floor. These waves penetrate the floor, but they damage all the life around it. There have been numerous cases when oil exploration efforts had to be stopped, because large numbers of whales in the area became disoriented and started swimming out to the beaches. The effects of the seismic waves are also harmful for fish, crabs, and many other marine animals.

Oil spills is another big problem causing pollution from offshore drilling. Every year there are 200-500 oil spills around the world, the vast majority if which never make the news. Oil spills severely contaminate both the sea and the land around it. The ecosystem around the oil spill may be permanently destroyed and it will never recover. Only about 5-15 percent of any oil spill can be successfully cleaned up. Furthermore, about 97 percent of oil spills are less than 1,000 barrels, which means it is not legally required from them to be reported, as their size is considered “small”. However, even small spills may have catastrophic effects, and this fact alone should not allow any more building of drilling rigs.

The drilling itself has discharges, which pollutes the area and can be just as environmentally damaging as an oil spill. The drilling process involves using a special fluid to lubricate the drill bit, so that it can easier get through the hard rock layer. When this fluid starts blending with mud, rock, and natural radioactive materials, it forms a toxic soup. This can spread for at least a kilometre radius around the rigs.

Waste is another problem with oil drilling being polluting. For every drilled well about 8,000 square feet around it can be covered by drilling waste as much as a meter thick, which can stick around for at least 2 years. If there was a strong wind or a hurricane
scattering the toxic mud, the waste could last for up to 40 years. All this evidence is sufficient to demonstrate that building more oil rigs would be nothing but disastrous.

For more information on offshore drilling, go to:
en.wikipedia.org