There are twenty one million people in Mumbai and this has created one of the world’s worst areas of pollution. Tight streets are crammed with garbage and the smell of sewage is everywhere. But in Dharavi, 400,000 people are changing the fact that they are one of the largest slums on the globe, into a super hub of recycling.

Every day in Dharavi, you see people that were previously unemployed, filtering through the garbage to pull out recyclable items and sell to the companies who will process the recycling. These are then sold to businesses that re-use the plastics, metal and recyclable items into products that are new. Tons of trucks show up every day to the dump at Dharavi, bringing in new shipments of items to be scavenged through, examined and all of the materials that can be recycled, pulled out, sold and reused. Many of the trucks delivering the waste contain items that were previously recycled, used and now thrown away again. 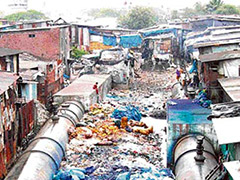 The Dharavi area has established themselves as a creative hub to not only rid themselves of the intense trash and waste, but bring employment and enriched lives to many who have been out of work for long periods of time. The recycling efforts of this metropolis has set an example not only for those people in the rest of Mumbai, but also for the world. The eventual goal is to reduce the intense amount of trash and waste and get the program to a controlled point where there will be a continual flow of garbage in- and productive recycling out. As the economy of the area improves, the investment can be made for more improvement into the rest of the pollution problems. The project also brings a heightened awareness to the fact that people can do something productive and profitable about a problem that they created.

4 Responses to “Mumbai Becomes the Super Hub for Recycling Efforts”