How Marine Life Can Protect Us from Hurricanes

Regardless of where you stand on the endlessly polarizing issue of climate change, it’s fairly safe to say that global temperatures have been getting more extreme on both sides of the spectrum. And the next time a heat record is broken, and the ocean waters bask in that heat, it could turn out to be the worst hurricane season yet. 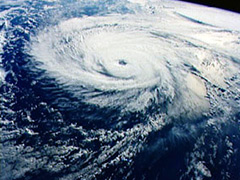 Indeed, the warmer the water, the stronger the gales of a hurricane, and the worse the damage. That’s something everyone should be able to agree is worth preventing, hence the University of Miami’s 10-year project of attempting to predict the occurrence and trajectory of these potentially life-altering storms.

How did these South Florida scientists go about this, you may ask? By using the multitude of large marine predators they have around them. Using biological sensors as tags on 750 marine animals over the course of the last decade, they’ve been able to track the temperature and salinity of sea waters at various depths.

The breakthrough came earlier this year. There was a pattern forming the data being collected from the tags. The chosen marine creatures all seemed to gather in water that 79 degrees Fahrenheit or higher. That’s exactly when hurricanes start forming.

According to a recent article by Steve Williams on the Environmental News Network, “The tagged marine life, by gravitating to these waters, can help scientists get an overview of sea temperatures as we go into hurricane season, particularly because the tagged animals (scientists are currently monitoring about 50 sharks, tuna, tarpon and billfish) all dive. That means that when they later surface and trigger the tag to relay data via satellites back to the team, the scientists receive a ‘vertical picture’ of what sea temperatures look like.”

That picture is accurately, and unimaginatively, referred to as the Ocean Heat Content or OHC—a figure used to estimate the strength and severity of a hurricane as it grows. Naturally, the scientists want to expand their model and gather millions of readings, which could raise questions about how humane tagging that kind of percentage actually is, but for now, we like the part about being prepared for hurricanes.