We are living in a fantastic time. Technology is making leaps beyond anything that would have been imagined just a few years ago. The focus of energy is top priority around the world, and industries, science and research are creating some incredible results. One of the biggest jumps has been in the area of supercapacitors, which can affect everything from energy storage in our smartphones, all the way to electric cars.

Researchers at UCLA are in the midst of pursuing a true miracle in energy storage, through the use of graphene for supercapacitor production. Graphene is a flexible, strong and very highly conductible carbon product that has the ability to store energy in a faster method than anything we currently have. To put it into perspective, the use of graphene supercapacitors could allow you to plug your cell phone in and have it completely charged in just a few minutes. Another idea for common use would be to have the ability to plug your electric car in, and instead of it taking hours, it will take only the amount of time it would normally take for you to fill your tank at the local gas station to bring a full charge.

The problems faced in the past have been that the capacitors designed could charge quickly, but not hold the charge for any length of time. The supercapacitor designs charge quickly and maintain the charge, bringing efficient energy storage abilities for just about anything 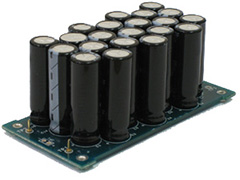