Residential solar energy offers many benefits over coal powered electricity. The same is true for wind power, geothermal power, ocean energy, and other green alternative energy. The government, both federal and state, have a vested interest in using green residential energy instead of the traditional fossil fuels. Most of the oil left in the world is under the middle eastern countries, which are notoriously unstable politically, and do not view America as a friend but rather a threat and a foe. The security and well being of the country depends on getting away from the reliance on foreign oil, and this means using green alternative energy instead. This energy is produced right here at home, and the cost does not fluctuate due to political concerns or unrest in the area. Without a global need for oil, many of the middle east countries that harbor terrorists would not be able to do so. 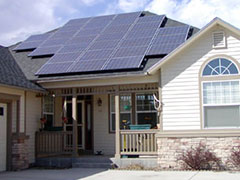 Residential alternative energy has not been in widespread use long enough for the cost of this technology to be low. Some energy methods are more cost effective than others, and wind energy may cost less in the initial stage than solar energy. Tax credits can play a big part in offsetting the initial costs you pay to change your home to green alternative energy, and there are a number of both federal and state tax credits that you can receive for switching to residential green energy. Some green energy solutions may receive tax allowances or deductions as well. Government support of residential alternative energy applications is important because of the high costs that these applications may come with. The costs have come down substantially in the last few years, making green alternative energy close in cost to using oil or other fossil fuels. With government support and subsidies added, this allows the cost of residential green energy to be comparable to other forms of energy.

Residential alternative energy still needs government support to make it cost effective and widely implemented. This will not always be true though, and at some point technology is going to be able to increase the effectiveness of energy generation from green power sources and lower the cost to the point that wind and solar energy, and other alternative green energy sources, will be much cheaper than oil or gas. With all the tax credits and government support that residential green energy receives, these green technologies are already cost effective.