Global Warming and its Predicted Effects on the US 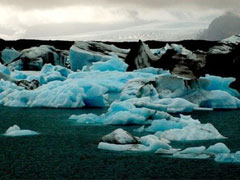 The number one problem of global warming for the U.S. will be water – either too much in some areas, or too little in others. States may start having conflicts over the water supply from shared rivers, and for some, new sources of drinking water will need to be found. The Great Lakes are predicted to shrink, and certain fish species will be eliminated as a result. In contrast, the coastal areas (both east and west) will have the problem of too much water and floods, as the sea levels are predicted to rise.

When talking about global warming and its effects, it’s important to understand that everything is connected (cause and effect). For example, shortages of water could occur because there will be less snow in some areas, and because of this there will be less snow melt to gather water. Some predictions say that precisely because of this, in areas like the Sacramento Valley CA there will not be enough water by 2020. Florida, on the other hand, will get more water though floods, which may damage its biodiversity. This is already seen through the increasing intensity of Florida’s seasonal hurricanes.

Other negative effects of global warming in the U.S. include threats to animals and plants in national parks because of less precipitation and warmer temperatures. Because of increased droughts and wildfires, a lot of the park flora is at a risk of being eliminated completely. Human pollution and global warming are a very serious threat to our national parks, and all scientists agree on this one.

But how does any of this affect you? Maybe you don’t live in the coastal areas and don’t visit national parks. The negative effects of global warming will also be felt in your pocket book, as insurance premiums are projected to skyrocket for residents of certain areas. Homeowners who live in a presumable “high-storm-risk zones” have already had their insurance policies cancelled. Others are seeing their premiums increase sharply.

Another personal effect of global warming that you should really think about is your children’s future. Whilst you (hopefully!) grew up in an environment with stable shelter, a food supply, and protection from natural disasters, this may not be the case for your children if we don’t make a collective effort to reduce greenhouse gas emissions. The next generation’s future depends on what the current generation does today, and that is something to really think about.