Energy of Stars and Galaxies: Could we harness the power of the universe? 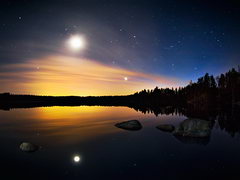 The energy of the stars has always fascinated a large percentage of people, and the big question is will this energy ever be harnessed and used by mankind? No one knows what the future holds, and it is very possible that at some point advances in technologies and scientific breakthroughs will make it possible to use the same energy that powers the stars and galaxies. Most of these power sources come from nuclear material, and from the nuclear fusion and fission processes. This leads to another question, is this safe? The energy of stars is created using nuclear power, and this process has many disadvantages and dangers involved which make it currently inadvisable. This power can be incredibly destructive, and if the process does not go as planned the entire planet could be at risk of permanent damage, or even complete annihilation. Space ships and shuttles do not use this energy source, instead they rely on rocket fuel generated from fossil fuels. It is not possible to create nuclear energy without taking large risks with the future of the earth and mankind, because one accident or mistake in the process can have very large consequences.

The energy of stars comes from nuclear reactions which occur, and these reactions hold an amazing amount of power. These reactions are what power the sun, and what is responsible for the stars shining in a clear night sky. This source of energy could be sustaining and renewable, and it is responsible for the life and energy of stars and galaxies. Once the reaction is started though, it may be difficult or even impossible to control or contain. This process can be self generating, so that the nuclear processes continue to grow without any additional sources, and this can be extremely dangerous. In space, when the energy is out of balance and the nuclear power process spirals out of control there are many results. A red star can emerge, which is very hot and bright until the energy burns out, and this can take thousands of years. Black holes can also result once the nuclear generation process and molecular reactions are complete. In the future, nuclear energy generation may be able to harness the energy of the stars safely and in a controlled manner, but with current technology and science this is not possible. The dangers and risks are still too great without new advances, and the benefits offered are outweighed by the risks involved.

There are a number nuclear power plants located around the world and in operation, and France receives a significant amount of power that the country needs from these plants, which also use the energy of stars. In the past, there have been a number of mishaps and accidents at nuclear power plants around the world, and these have caused large numbers of deaths and injuries, and environmental damage that is still present in some places like Chernobyl. Using the energy of stars may include future discoveries other methods and processes besides nuclear fusion and fission, but until space and other galaxies are reached and explored these alternative energy sources have not been discovered yet. Harnessing the energy of stars and galaxies will probably be possible in a safe and effective method at some point in the future, but because of the high risks, and effects that may last thousands of years when leaks or explosions occur, this power source is not an ideal option for large scale global use. Nuclear material which is used can be stolen, and used by terrorists to make weapons or threaten populations. The destructive nature of nuclear material means that the use of it must be closely monitored and regulated, and there is no guaranteed safe way to utilize this material to generate all of the power needed.

One Response to “Energy of Stars and Galaxies: Could we harness the power of the universe?”