Ecological Crisis Can Be More Devastating than Crisis on Wallstreet

With the global warming and ecological crisis, permanent damage to the earth has already been done, and if steps are not taken immediately to prevent further damage, the earth will not recover like Wall Street will. Switching to renewable alternative energy sources which are clean and do not contribute to pollution or global warming is the key to stopping the crisis and preserving the earth in good shape for the next generation, and the ones after them. Continuing the use of fossil fuels which contribute carbon emissions and speed up global warming is no longer an option, and even scientists who previously believed that the weather and temperature changes occurring were not serious have started sounding a warning. It is not too late to turn this environmental crisis around if immediate action is taken, but if nothing is done the earth will not survive the abuse. We are destroying the planet that takes care of us, and this must stop before the damage can not be fixed. 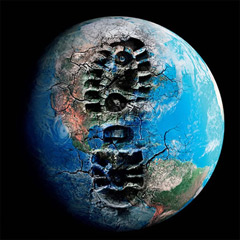 Times are tough all the way around the globe right now, and there are two separate problems faced by the entire world: the economic crisis faced by Wall Street and other investment centers, and the ecological crisis which the earth and entire population is facing. Between the two, the ecological crisis with the global warming problem is the biggest danger to world ecosystems. The financial crisis will eventually be turned around, and more regulation and closer supervision for companies who want to take risks with money not their own will help ensure that there is not a repeat of this crisis any time in the near future. Yes, the economy has been compared to the Great Depression, many thousands of people are suffering due to layoffs and company closings, and things have gotten pretty grim for a lot of folks. The fact still remains though that eventually the economy will rise again and become stronger for the crisis.

Unfortunately, the same can not be said of the current ecological crisis and global warming problem. This crisis will have devastating effects on the entire planet and all living things which inhabit it. Scientists are warning that global warming is speeding up, and the continued use of fossil fuels which release greenhouse gases and pollute the environment is making the problem worse. Global warming is a misnomer, because not all areas of the earth are warming. World ecosystems are changing, which can lead to a loss of natural habitat for many animal and plant species. Some areas may get cooler, disrupting food supplies and growing periods. The melting of the ice in Antarctica will increase sea levels around the world and lower the sea temperature. This may seem like no big deal, but even a few degrees difference can have devastating effects on some areas, like the tropics.

The Wall Street financial crisis has had some devastating effects, there is no doubt about that. Many investors have seen their portfolios fall to almost nothing, and the retirement funds and other investment funds have lost trillions of dollars in value. Some have seen their entire life savings for retirement disappear after a life of hard work and discipline to save for their golden years. The up side to this crisis is the fact that eventually the market will go back up, and investors who held on will see their investments gain some value when this happens. Given time, the market will correct itself and the crisis will be over. Investors will be a little more wary, and regulations will probably be much tighter, but no real permanent damage will be done that can not be repaired given time.