Artists around the world are taking on the topic of pollution in a way that will attract and keep our attention. In an effort to bring to the forefront the ways that humans are creating a toxic environment, eco artisans are creating masterpieces that offer a visual sense of beauty with a disturbing message that we cannot forget. 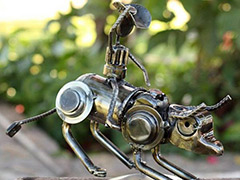 The creative designers called Bloo Nation have designed “The Waving Wall”, a street art in a wave pattern made of 1,200 nineteen liter water bottles. The purpose of the art is to bring attention to the amount of embedded water waste we use in the plastic water bottles that we purchase. The beauty of the wave and the message that is being stated is that this is the amount of water needed to create two pairs of jeans and the plastic that is being discarded is simply overwhelming.

Artist and photographer Mandy Barker’s ‘SOUP’ design is a series of images that focus on the immense amount of plastic products that humans have dumped and contributed to the current “North Pacific Ocean Garbage Patch”. Recent scientific research is showing that the ‘garbage patch’ has extended and grown, with plastics being reduced to smaller and smaller pieces, so that many areas of the world’s oceans contains some level of plastic.

Downtown Lisbon, in Portugal features an incredible visual called ‘Frozen Trees’. Designed by LIKE Architects, they are made of thousands of plastic bag dispensers from IKEA and changed into tall objects with 30 LED illumination and have a street light effect.

Eco artisans around the globe gather items that would normally be placed in landfills and trash heaps and create works of art that remind us that we absolutely have to stop the blatant pollution. Things can be reused and recycled as well as produced using sustainable and renewable energies.