Conservationists Turn To Unmanned Drones For Park Surveillance And More

With illegal poaching at all-time highs, conservationists are searching for new methods that can be used to combat this growing issue. One unorthodox solution that has been gaining traction is the employment of unmanned drones. Although the drones can be costly and tough to navigate, a new international competition called the Unmanned Aerial Vehcle (UAV) Challenge encourages people from around the world to develop and fly their own affordable drones at Kruger National Park in South Africa, in an attempt to bolster the park's conservationist efforts. 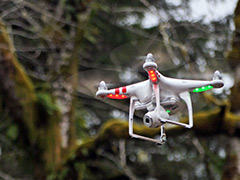 While the competition marks a historic moment in the history of conservationist drone use, these vessels have been helping environmentalists in numerous ways for some time now. The WWF recently accepted a $5 million dollar grant from Google for the purposes of aerial surveillance using drones in Asia and Africa, in addition to the fact that some companies have used the devices to monitor illegal fishing along coastlines.

Drones are also excellent at collecting data on animals by way of taking up-close images as well as providing park managers with numbers on population and food supply. The devices, however, focus not only on animals, but also their surrounding environment, as ecologists survey changes in land and climate with the drones. According to researchers, drones expedite the process of surveying climate by obtaining a larger picture of the environment at a much faster rate.

Conservationists prefer the drones because they offer a low-risk alternative to manned surveillance, which can be risky, especially in parks where poaching is a problem. As engineers, hobbyists, students, and other scientists develop drones that are increasingly durable, easy to fly, and cheap to make, the devices should continue to be a mainstay in national parks across the world.