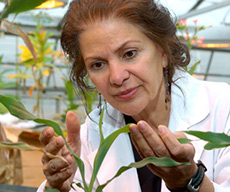 Is cellulosic ethanol going to be able to revive the struggling U.S. economy? Many Americans do not even know what cellulosic ethanol is, or how it benefits the country, but this biofuel may be the answer to rising oil prices and dependence on foreign nations for fossil fuels.

A lot of Americans are familiar with corn ethanol, but this biofuel can only help some because it not a total substitute for gasoline, but must be added to it. Cellulosic ethanol is a fuel for transportation that is both renewable and environmentally friendly because it burns much cleaner than fossil fuels, similar to other types of ethanol. The process of making this type of ethanol does not require pesticides, water, fertilizers, or any other type of energy. Cellulosic ethanol can be made from plants that are not typically used for food, such as switchgrass, wood products, agricultural waste, and sugarcane bagasse (biomass for sugarcane), as well as from a wide variety of feed stocks and food crops.

When conventional, grain-based ethanol is compared to cellulosic ethanol, the molecules of both are identical, yet they are different in the fact that cellulosic ethanol uses a portion of the feed stocks that is not edible, including corn leaves, stems and cereal straws. It can also use designated energy crops that are not at all used to produce food. Conventional ethanol only uses a small amount of the feed stock, and this part is the edible part. There are differences in the refining methods. Cellulosic ethanol involves a more complex process, but this type of ethanol will also yield more energy benefits and burn much cleaner than corn-based ethanol. Corn-based ethanol produces more greenhouse gas emissions.
Cellulosic ethanol may hold the answer to the ultimate biofuel of the future once the technology is perfected, and this may very well help out the struggling American economy. The price of oil will no longer hold the American economy hostage to the whims of foreign countries and leaders, and America will no longer be dependent on fossil fuels. Renewable energy sources like cellulosic ethanol are important to the future of America because they will not only help the economy, but will also reduce greenhouse gas emissions and slow down and prevent further damage to the earth through global warming. Cellulosic ethanol will eventually be able to be produced across the United States, so there will be minimal transportation costs in transporting this biofuel to its various destinations. These plants will also help local economies because jobs will be created, new taxes and revenue for the city or town will be generated, and locals will have access to a nearby and relatively inexpensive clean-burning fuel.