Thanks to researchers at the Marine Institute and the University of Southampton, we’ll have to seriously rethink our deep-sea fishing practices. You see, when we dip those big fishing trawls into the ocean depths to scoop up all the eatable goodies, we’re inadvertently catching unwanted bottom dwellers that die and get thrown back. 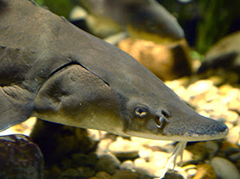 This is extremely wasteful for a number of reasons in light of the researchers’ discovery that these bottom feeders are actually carbon sinks—natural receptacles for excess carbon dioxide that contributes to global warming not unlike forests and the ocean itself.


When mid-level swimming fish like squid and jellyfish make their deep-sea dives after feeding on the surface, they’re often caught and eaten by these bottom dwellers. The carbon present in the systems of these mid-level swimming fish is then contained within the bottom feeders. University of Southampton scientists estimate that these carbon sink fish are neutralizing more than a million tons of carbon dioxide from UK and Irish waters alone.

According to a recent article by Steve Williams on the Environmental News Network, “The researchers investigated this by collecting muscle tissue samples from fish caught in fish trawls off the west coast of Ireland, at varying degrees between 500 and 1,800 meters. To look at how much carbon was present at each stage they searched the muscle samples and looked for carbon and nitrogen isotopes. By doing this, the researchers are able to see how carbon transfers through the ecosystem and thereby determine diet and the predator/prey dynamics of that area.”

In addition to illuminating a potential ally in the fight against global climate change, this is a important find in that it calls for increased regulation of fishing practices or an overhaul of the industry as we know it.