Biomass Fuel: Will It Help To Improve the Future?

Both ethanol and biodiesel can help with the energy and environmental concerns of today, leading to a brighter future. These biofuels will cut dependence on foreign oil and other fossil fuels so the United States will never have to worry again about gasoline prices dictating policy decisions, or a need to appease foreign leaders who have the power to shut off fuel supplies. Instead, biofuels can be produced domestically, thus the cost will be much lower. Smog and air pollution will be reduced and eventually eliminated because both ethanol and biodiesel burn much cleaner than their regular fuel counterparts. 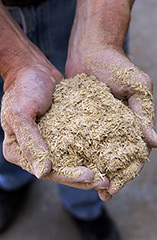 Can biomass fuel help improve the future? With rising concerns about global warming and air pollution currently, many people are starting to pay attention to alternative renewable energy sources. Biomass fuels are exactly that. Biomass is any organic matter that comes from plants and animals. These are sources of stored energy from the sun by photosynthesis. Plants use the sun's energy during photosynthesis and humans and animals gain this energy when they eat plants.

Biomass fuel can help to improve the future in many ways with their many benefits. Biomass fuels are much friendlier to the environment than fossil fuels for many reasons. Biomass fuels do not contain sulfur in their emissions like fossil fuels, and sulfur is the component responsible for harmful acid rain. When burned, biomass fuels will release some carbon dioxide, but this is offset by the fact that biofuels are produced plant matter, which absorbs carbon dioxide from the atmosphere while growing.

Right now there are two main types of biofuel available: ethanol and biodiesel, each with its own source. Ethanol can be made from corn or cellulose material and has been in wide use since the 1990s. Ethanol is blended with gasoline in two different combinations. The most common ethanol blend will contain 10 percent ethanol and 90 percent gasoline. This fuel mixture will work in almost any gas engine. The other blend available consists of 85 percent ethanol and 15 percent gasoline. This blend may require some engine modifications before it can be used.

Biodiesel is made from oils like rapeseed oil, vegetable oil, animal fats, tallow, lard, and other types of fats. Biodiesel is made in a process called transesterification. This process replaces the glycerol in vegetable oil with alcohol, so that the oil is not as thick and flows better through an engine. Biodiesel was actually used more than 100 years ago in one of the first engines ever built. This engine was constructed by Rudolf Diesel and ran on peanut oil.
Biofuels are renewable, and if we plant the crops needed to replace the energy we use, we will have a resource for fuel that is sustainable and will never run out. There will be no huge price spikes because of fuel shortages. Biofuel plants also enrich the local communities where they are located. New taxes and revenues would be generated for the area, and there would be a demand for both skilled and unskilled labor. Biofuels offer many benefits that can make the future a better place and help keep the earth in good condition.

2 Responses to “Biomass Fuel: Will It Help To Improve the Future?”