Producing biofuels can help boost revenue and the economy of an impoverished area, but caution should be used to ensure that the food supply is not affected. Most people who live at or below the poverty level spend 50 percent or more of their income on food. This needs to be considered when deciding on whether to plant crops for biofuels or not. Not all biomass energy is derived from the food supply. Most of it is derived from feedstock grade crops or from plants and other organic material that is not used as food for people or most animals. Castor oil plants and many others can be used for biomass energy and biofuels without affecting the food supply or the prices of food. Producing biofuels from these sources, since people will be needed to grow and process the crops, can improve the economy by adding jobs. This could give a big boost to areas that are poverty stricken. 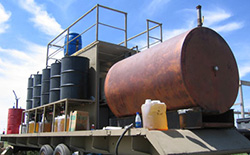 Producing biofuels can help many countries and areas meet their energy needs. Biofuels can also help boost economies by creating jobs and additional revenue. There have been many stated concerns from around the globe concerning biofuel production, especially from India and many African countries. The argument is that the crops grown to produce the materials necessary to make biofuels will take away from the crops grown to produce food, and of course these countries contain millions of starving people. Another argument is that biofuel production will cause grain prices to increase significantly and that there may be even more food shortages in areas that are stricken by poverty.

Many of these criticisms are unfounded. Producing biofuels would not have to take away from food supplies or cause prices to rise. People who argue against them simple do not have all the facts, facts that are actually in favor of this technology. The world actually grows many more crops than those that are meant for food. The biggest problem is not that food is unavailable, but simply that the level of poverty experienced by certain areas does not allow for sufficient funds to purchase food. Even in America, one of the most abundant nations in the world, children in many areas go to bed hungry every night. Of course there is more than enough food in America to feed these children and food stamps for those who qualify, but still they go hungry.

In many third world or impoverished countries, many farmers are subsistence farmers. These people grow enough food to only sustain themselves and their families. If they are lucky, they will produce a surplus that they can sell for extra money on the market. This leads to a concern that large farms meant for biofuel production will push these small farmers out of their land and then they will be unable to produce food. This is not true. If care is taken, growing crops for biofuels could actually help these smaller farmers out. They could grow biofuel crops as well as their own food and would benefit financially.

Water and available resources should also be considered concerning rural areas or impoverished countries. Growing plants require nutrients and water. If these resources are not available, then it is possible that small farmers and those living in poverty may be affected. Diverting these resources for crops to create fuels would create a hardship, so measures should be taken to ensure that there are adequate resources available before deciding on the proper locations to grow these crops.