The extreme conservatives in Australia’s government lead by Prime Minister Tony Abbott, who obtained his position just last year, have repealed a nationwide carbon tax that had grown increasingly unpopular in the last two years. An amount of $22.60 per metric ton of carbon dioxide was charged to the nation’s biggest carbon pollution offenders under the tax law, which came to fruition in 2012. 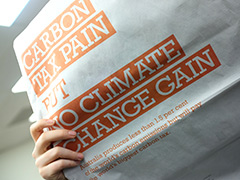 Leaders in Australia managed to politicize the tax, claiming that it “damaged jobs…hurt families…and didn’t actually help the environment,” as Abbott himself put it. As a country, Australia ranks near the top in greenhouse gas emissions because the country resorts to using cheap coal as a major energy source instead of employing cleaner methods.

Though unpopular from the start, political groups managed to sour the public’s opinion on the carbon tax by linking it to rising consumer power bills, despite the fact that the tax had little to do with the increase in rates. The abolition of the tax has been hailed by businesses and industry groups in Australia, who called the tax a massive burden on the economy, while environmentalists in the country referred to the reversal as “an embarrassment.”

While the truth probably lies somewhere in between, the decision makes Australia one of the first nations to invoke federal climate change legislation and repeal it shortly thereafter. Abbott claims that the tax will be replaced by a taxpayer-financed, multi-billion dollar fund that will go toward industry incentives for cleaner, more efficient energy.

Given the history of Abbott’s administration thus far, it will take a great deal to demonstrate that his plan is more than a guise for industry kickbacks. It is curious that the government of a country currently experiencing its hottest years in recorded history would fail to implement a more progressive stance toward climate change.