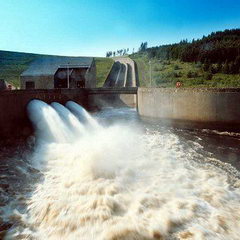 The advantages of hydroelectric energy include stable energy costs, a renewable energy source that is eco friendly, and a very efficient and effective source of alternative energy.
The advantages of hydro energy includes the fact that these plants can last more than one hundred years, and provide almost free energy once the construction costs are recovered.
Hydro energy uses the force of water to turn turbines, which generate electricity without any pollution or carbon emissions.

The advantages of hydroelectric energy, also called hydro energy, as an alternative and renewable energy source are numerous. This form of generating energy has been used for hundreds of years, and people long ago used the first hydro powered devices to grind their corn into meal, and later their wheat into flour. The very first residence that ever used this source of energy generation started using hydro energy for power in 1848, and it is Craigside House, which is situated in Northumberland, England and still stands today. Around twenty percent of global energy that is used is produced by hydro energy. One of the best advantages of this form of energy is that there is no pollution. The only resource used is water, and there are no carbon emissions or greenhouse gases released to speed up global warming. There is no waste involved in this form of renewable alternative energy generation either, because the force of the water turns the turbines and generates electricity, without using up the water. After turning the turbines, the water continues downstream. The sun condenses the top layer, which forms rain clouds, and the rain will replenish the water released from the dam.

There are many other advantages of hydroelectric energy as well. There is an initial cost to build the dam and the hydro energy power plant, including the turbines needed to generate the electricity, but once these are built there is never any more costs involved in the energy generation except for routine operating and maintenance costs. This makes all the energy generated after the cost of the facility is paid for pretty close to free. This will ensure affordable energy for everyone. Another advantage is that this form of alternative energy is a lot more reliable than either solar or wind power. With hydro energy generating facilities, energy can be continuously generated all the time. With solar and wind power, there are only specific times when energy can be generated, and other sources must be used if these are not available when needed. When energy is needed it can be supplied by hydroelectric power. For peak demand times, water can be released from above the dam where it is stored to generate extra power. When the energy is not needed it can be added to the grid for future use. These facilities do not require large numbers of employees to operate, and most have automated systems which take care of most of the plant operation with minimal oversight.

One of the biggest advantages of hydro energy is the fact that once they are constructed, these facilities can quickly get up to full operational capacity in very little time. This source of alternative energy is renewable, unlike fossil fuels, and this will keep energy prices stable with no sudden spikes due to the depletion of the natural resources used. These facilities can range from micro sized to power a couple of homes at the most to the size of the Hoover Dam and bigger, to power large cities and areas. This advantage means that these facilities can be places in strategic locations no matter how small. Rivers, fast flowing streams, and other forceful water areas can be optimal sites for hydro electric power facilities. Even though the initial cos is comparable to most other power plants, hydro energy plants will last considerably longer. Some of these plants have already been used for up to a century, and they are still working efficiently. The many advantages of hydroelectric energy make it a very good energy source for the future, one that does not pollute and is very efficient and effective, without depleting the natural resources used.

Posted on May 9th under Hydro Energy.
Permalink | Comments (0) | Technorati — View blog reactions | Save to del.icio.us