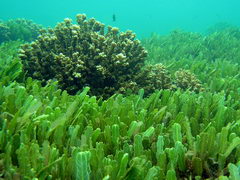 Biomass energy may very well be one of the most viable energy forms in the future, where alternative energy generation is a must because of all the alternative energy advantages over using fossil fuels. Global warming, carbon emissions, and air pollution are all becoming worse due to fossil fuel use. This must be stopped, and biomass is the answer to meeting global energy needs without relying on limited fossil fuels which damage the earth and harm the environment.

1. Algae. Algae is a very promising feedstock for alternative energy generation. There are several types of algae that are very high in natural oils, and these oils can then be used to produce biofuels for use. The trick is to find the algae strains which have the highest oil concentrations, to make this feedstock highly efficient. Further research is being done to this particular feedstock, to find the best possible strains and make algae farming part of the energy future as an effective biomass feedstock.

2. Fungus. Fungus can be a very important feedstock which offers all of the alternative energy advantages, but this feedstock may be expensive and complex to produce at first. There is a fungus that was found on a tree in the Patagonia forest that can produce biofuel from naturally occurring petroleum like hydrocarbons under certain circumstances. Unfortunately, this fungus only produces these hydrocarbons under very specific circumstances which involve very low amounts of oxygen in the environment.

3. Municipal Solid Waste. Municipal Solid Waste, also called MSW, is a feedstock for generating biomass energy. MSW is simply common household trash, the stuff that every home and most businesses throw out in their garbage. With a waste to energy facility, this garbage can leave your home as discarded trash and end up coming back as energy and electricity. There will always be waste created by people, so this is a renewable alternative energy source which will probably never run out.

4. Waste Vegetable Oil. Unlike all the other promising feedstocks for biomass energy, waste vegetable oil does use food crops, but only ones which were turned into vegetable oils, used, and discarded as no longer suitable for human consumption. Many fast food restaurants go through hundreds of gallons of vegetable oil each week, and this oil is simply thrown out into the trash. It can be filtered and then modified to make biodiesel.

5. Castor Bean Plant. The castor bean plant is a plant that is rich in oil, and this is where castor oil, that was commonly used in the past as a medical remedy, comes from. But castor oil is very thick, around one hundred times thicker than diesel oil is, and the process used to produce biodiesel from this feedstock does not thin it out very much. More research and work needs to be done for this feedstock to live up to it's promise, but that time will come.

6. Jojoba. The jojoba plant is another oil rich plant which shows great promise as a biomass energy feedstock. This oil has no sulfurs at all present, and it has been used in trials as a form of biodiesel already, with no thickness issues or loss of any performance and power seen. Jojoba biodiesel will burn cleaner than that made with many other oils, cutting out most of the air pollution problem.

7. Rapeseed. Rapeseed shows a lot of promise as a feedstock for alternative energy generation. This plant is not a food crop, and can be grown in many areas where food crops will not survive. Rapeseed is naturally high in oil, which can be turned into biodiesel with a few simple steps.

Posted on May 5th under Biomass Energy.
Permalink | Comments (1) | Technorati — View blog reactions | Save to del.icio.us

One Response to “7 Most Promising Feedstocks for Biomass Energy Generation”