There is a common belief that if no one cleans it up now, it will just keep growing and the water will get more and more contaminated. This is not entirely true, since a lot of the trash sinks to the bottom, since a lot of the particles in it are more dense than seawater. Also, a lot of the trash gets washed up on islands in the middle of the Pacific, instead of just floating around. Not that this is a better option, but it at least it won't keep accumulating on the water surface. 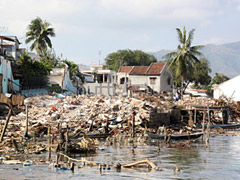 3) Most of the garbage comes from Asia.

If you've ever visited the less developed countries in Asia, this will become obvious. The Mekong Delta in Vietnam alone could probably be responsible for a large chunk of the garbage in the Pacific. China and Bangladesh are not far behind, if not ahead. The problem is that people are not educated with regards to rubbish in these countries. The rivers there serve as sewage canals, and whatever the population doesn't want gets discarded into them (individuals and large corporations alike).

4) The garbage concentration will continue to stay the same over the years.