With a majority of the world all aflutter over the potential of solar power as a large-scale fossil fuel alternative, it’s easy to forget about the modest but effective world of wind power. Well, look no further than a tiny Danish island known as Samso for the wind energy beacon light. Every day, Samso powers up with nothing more than harnessed wind energy. 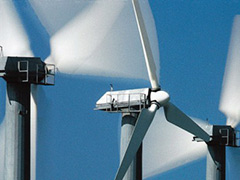 Granted, the Danish island is constantly pounded by winds coming off the North Sea, which make it more ideal than some locations. But, then again, not every location needs 100 percent of their power burden lifted by a cool ocean breeze. In most instances, wind power is there to supplement, and if nothing else, Samsois proof that this alternative energy source can handle its fair share (the island is far larger than Manhattan, New York in area).

How does Samso Island pull it off? The answer is a two-pronged approach. The 4,000 people residing on the island actually own shares in the operational windmills. So, they have a stake in the outcome beyond that of just pure environmentalism. The whole idea is a brilliantly conceived green incentive project.

According to AlternativeEnergyNews.info,“The one thing that holds many of these projects back is the financing of them. They can be quite expensive to get rolling, but because of islands like Samso, improvements will continue to be made and over time, these prices will come down. We just need to keep plugging away and sooner or later the world is going to come around to greener way of thinking.”
With that issue out the way, we would argue that the only remaining obstacle to widespread implementation of wind power is the NIMBY (Not In My Back Yard) issue. The tax bases that can afford wind turbines often vote them down because they deem them to be loud and intrusive eyesores. Even so, it’s a small price to pay for energy sustainability. To their credit, the large majority of Samso’s residents prefer clean and reliable electricity to old standards of civic beauty.