What is The Cost of a Solar Power Plant?

In our search for renewable energy, many state, local and Federal Government organizations are looking into the cost of solar power plants. The technology may have come a long way in the last thirty years, but the cost still remains one of the disadvantages of solar electricity.

There are two main methods of collecting solar electricity: The solar thermal method that uses mirrors for the reflection of the solar energy into pipes that are filled with a salt solution. When the solution temperature is raised to the boiling point, the steam that is created is used to operate generators. The second method is the semiconductor or photovoltaic cells. The solar absorption process converts the sunlight using a silicon based cell and then converts it into energy electrons. 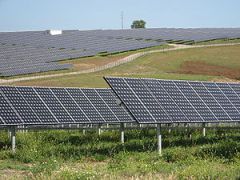 Countries that do not have easy fossil fuel access have been using both of the above alternatives for many years. The cost per kilowatt is much less for them, than using the standard fossil fuel heating methods. In the U.S., where fossil fuel energy remains less costly, the 2004 start up costs for a solar powered plant started at around $150 million for ten megawatts; which converted to $15 per watt. The 2010 prediction for the price has been extrapolated to be a lot less; reducing the cost to around six cents per kilowatt hour.

Some state governments are under mandates to produce a percentage of their energy using renewable resources. A few of the sun states are therefore creating solar power farms. Many of the solar cell manufacturers are working with private and government organizations to enhance the solar technology. One of the main achievements has been to reduce the silicon cell wafer to be forty percent thinner. The technology also enhances the lifetime of the wafer itself, giving it increased longevity.

Companies around the world are stepping up to the energy plate and pooling their research and development teams for the production of better quality and higher capacity solar cells. They know the interest and the money is there and they are developing less costly, higher efficiency products. Companies in Japan and Europe seem to have both the incentive and the sales and have leaped past the U.S. in the technology improvement as well as product sales. The U.S. may be a major player in solar research, but it hasn't been until more recent years that the general public, states and businesses have turned their interest towards investing in solar power plants. While the cost was always listed as one of the main disadvantages of solar electricity is was combined with the lack of need in the U.S. industries.

It looks like the supply and demand rule still remains the main driving force for both scientific research and implementation of solar powered electricity. As the need to rely less on fossil fuels is spurred forward, the U.S. will slowly make the transition and begin investing more time and dollars into solar power plants. As with all industries, the cost per kwh will be reduced and solar electricity will start to become the norm.