So, how are the growing global water crisis, unlimited energy and China linked? In my research on the subject, I found some interesting developments, and it is not an exaggeration to say that the technological advancements been made now could truly be the next Sputnik – as the technological race to save our planet from pending doom heats up… 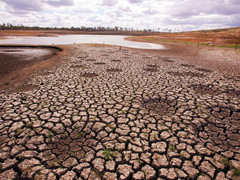 The water crisis
The water crisis is so far only limited to certain parts of the world, which get little natural rainfall and whose population and consumptions rates are increasing. However, it is projected to affect large swathes of the globe in the next generation, with the pressures on the water supply increasing at such a rate that the water tables just will not be able to keep up, even in areas which get significant rainfall. We are reaching this level fast – 60 years ago, the world had roughly 4000 cubic meters of fresh water per person per annum. Two generations later, and we only have 1000 cubic meters per person per annum. That is a big drop! And it is only projected to fall further.

Some people point to the large reserves of fresh water in countries like Russia and Canada and as a savior, but that, of course, fails to point to the fact that transporting water from these countries abroad would be economically unfeasible. Others point to the changing weather patterns and increased rainfall in some parts of the world. True, some localized areas will not experience problems with water due to this, but they are in the minority, and most parts of the world will not be saved by changing weather patterns – in fact, quite the opposite, as many of the more highly populated parts of the world are projected to become drier.

The real answer, according to many scientists, lies in desalination. 96 percent of the world’s accessible water lies in the oceans, but, drinking a glass of seawater just doesn’t cut it on a hot summer’s day. If only we could get all that damn salt out, and the problem of water scarcity would be solved forever! The good news is that desalination technology does exist, and we can turn seawater into fresh water. The bad news is that it uses an unbelievable amount of energy, and is thus way too expensive to be a valid solution.

Industrial desalination involves big plants that convert large amounts of ocean water into something that will actually quench your thirst, and the only thing standing in our way of the construction of countless such plants is the price. Hence, if we can find away to (truly!) harness the power of something to give us vast amounts of cheap energy on a scale never seen before, then we are on our way to success. That is where the next part of the story begins.